I have my own struggles just like anybody else.

I LOVE to empower, encourage, uplift others, and sometimes I’m not in the headspace to do so, because I need it myself.

Sometimes I get discouraged by things happening in my own life. But then I remember, that I can make peace with where I am.

Life will never be perfect. Curveballs will always get thrown your way. Challenges will come. People will let you down. But you can still make peace with where you are.

Just remember you are not where you used to be, and that’s something to celebrate. The journey to becoming who you are meant to be…is what it’s all about 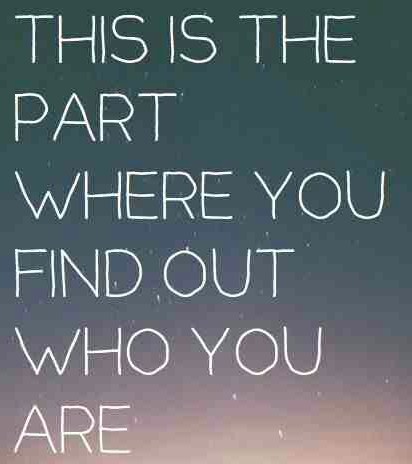 Dear Kings and Queens…
Be patient with yourself. Rome was not built in a day. Your purpose has been in you since day 1, but the fullness of it doesn’t need you to be perfect; it just needs you to accept that you will be imperfect and rely on grace. Then when you learn to rely on that grace, you’ll learn to extend it to others.
The more YOU try to do on your own, the less you activate the power of grace and the magic of forces beyond your understanding.
Stop trying to make things happen. Let it be.
Dear Kings and Queens, kingdoms were ruined off ego, but elevated because of grace, wisdom, and purpose.
You are royalty, perfect in all your imperfections, walk around as if you are always wearing a crown…because you are ❤

Dear Kings and Queens, you are powerful just as you are right in this very moment. Own it!

Running is all I’ve known for so long.

Growing up here in my hometown, it was pretty isolating quite often. I had friends, but I always felt different from everyone else. The only ones who could relate were my sisters. And even the three of us are unique in our personalities, giftings and callings.

I was socially awkward as a child. I was pretty sensitive, picking up on things quite often. I wrote songs, and was unusually spiritual for a child. In addition, my parents were pretty overprotective of my siblings and I and we were often ridiculed for not being able to do much outside of church activities and services. I can’t explain it, but I felt like an outcast and an outsider. So, I vowed that as soon I could, I would leave my hometown and never look back.

Why did I want to run?

Well, who wants to remain in a place where they were ridiculed, stuck out like a sore thumb? Where nothing but painful memories surround them? Where just running into former classmates conjure up memories of the past? I mean, who wants to be continuously reminded of their awkwardness?

But then something happened this year. A life changing thing. My son was born.

And suddenly, nothing else mattered. The day he was born? I was reborn. My life began to take on new meaning, and things began to make sense.

It’s been evident for quite some time to me, and even to some of my friends/acquaintances/strangers that God’s hand has been on my life for as long as I can remember. Things that others went through, I was protected from. But, silly me, I wanted to go through the other mess people went through
. I felt like I was missing out. But now I know better.

I have to be honest, I have been great at encouraging and empowering others, but then thinking the same advice didn’t apply to me.

This summer I had to.

I had decided to take the next steps into furthering my career by enrolling in a graduate program nearby. I chose it for convenience.

But I learned that convenience doesn’t always mean it’s best for you.

Ok so back to the story.

Over the course of summer, I noticed an increasingly nagging feeling of uneasiness with the decision I had made. . Academically, I was doing great. But, I kept thinking of transferring. And I kept dismissing the idea.

All while I was telling my baby sister to consider all her options, I was shutting down all of mine, because I was a mother, because I was a wife and had a family to consider. So I would sacrifice my happiness to do the responsible thing. I kept telling myself these things, in hopes that the nagging feeling would go away and I would eventually be okay and at peace with my decision.

That nagging feeling never went away. In fact, it only grew more as the summer term began to wind down. I knew I had to do something; question was, would I have the guts to pull the trigger and do something about it?

I sought wise counsel and they told me, to trust my instincts and to do what makes me happy.

Amazing how a lightbulb goes off when you have to listen to your own advice being repeated to you!

So I sprang into action, knowing I would have to move quickly. I had to narrow down a list of online schools, to the ones still taking students for the fall semester. I also had to use other criteria, and I was able to find just one school that fit my needs and my wants. I was accepted, began my first semester at the new school, and I must say, I am so glad and thankful I did something about that nagging feeling.

Was it scary? Yes. Was it a huge risk? Yes. And I won’t know how much of a risk it was until I finish my masters. But I hope it is one that will pay off.